A bit of stargazing occurred in the Cedar Valley Tuesday morning as NFL Hall of Fame quarterbacks Peyton Manning and Kurt Warner appeared in Cedar Falls. 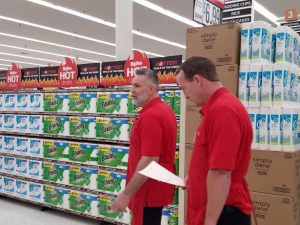 Part of the appearance took the duo to the Cedar Falls Hy-Vee.  Warner worked at the College Square Hy-Vee stocking shelves during his playing days at the University of Northern Iowa. The appearance was being filmed to be a part of Manning’s show “Peyton’s Place,” which airs on ESPN.